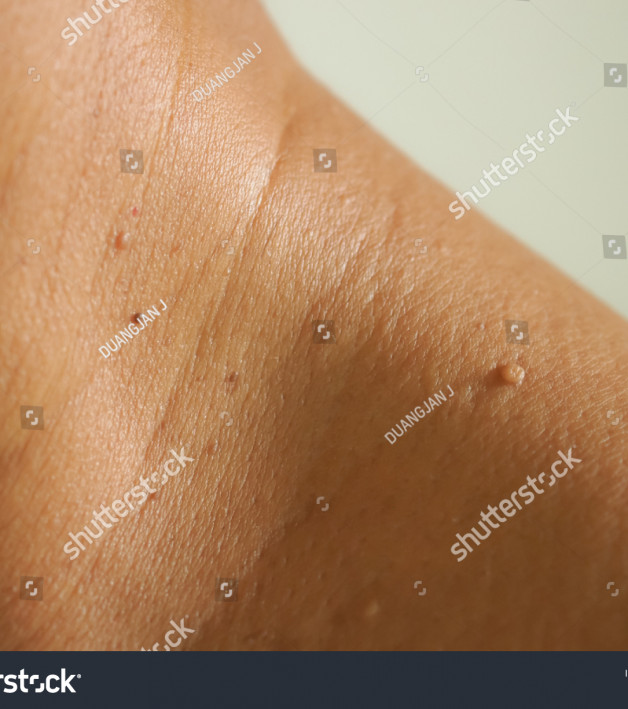 Acrochordons, also called skin tags, are very common benign skin growths. It is estimated that almost half of adults have at least one of these harmless growths. They occur more commonly in obese or diabetic individuals and in people with a family history of skin tags. Acrochordons affect men and women with equal frequency.

Acrochordons can appear as early as the second decade. Typically after age seventy people do not develop new acrochordons. They tend to grow in areas where there are skin folds, such as the underarms, neck, eyelids, and groin. They are skin colored or brown ovoid growths attached to a fleshy stalk. Usually they are small, between 2-5 mm, but can grow to be several centimeters. Acrochordons are not painful but can be bothersome. People frequently complain skin tags get caught on clothing or jewelry.

The cause of acrochordons is unknown, however there are several theories. Irritation or friction to the skin, as occurs with skin rubbing on skin in body folds, may play a role in their formation. Acrochordons are found more commonly in people who are overweight or have diabetes. This may be due to body habitus (more skin folds), but some people think insulin resistance may somehow contribute to the development of these harmless tumors. A study of 49 patients with acrochordons showed that the human papilloma virus (HPV) was present in a high percentage of growths, suggesting the virus plays a role in development. It is also possible that acrochordons are genetic or simply due to normal aging and loss of elastic tissue. There is a genetic disorder called Birt-Hogg-Dube Syndrome that is characterized by numerous skin tags along with other skin and systemic findings.

Cited from the American Osteopathic College of Dermatology

TREATMENTS
Acrochordons are harmless and do not require removal. Typical skin tags can be removed for comfort or cosmetic purposes either by scissor excision, electrocautery (burning), or cryosurgery (freezing). Skin tags with long, narrow stalks can become twisted, cutting off the blood supply and abruptly turning the tag dark brown or black. If a skin tag appears that it is changing or becomes painful, it should be examined by a dermatologist to exclude other, potentially harmful diagnoses.
Cryosurgery
Electrocautery
Other Conditions
Browse our full range of cutting edge medical and aesthetic procedures that will leave your skin looking and feeling it’s best.
View All Conditions
Skin